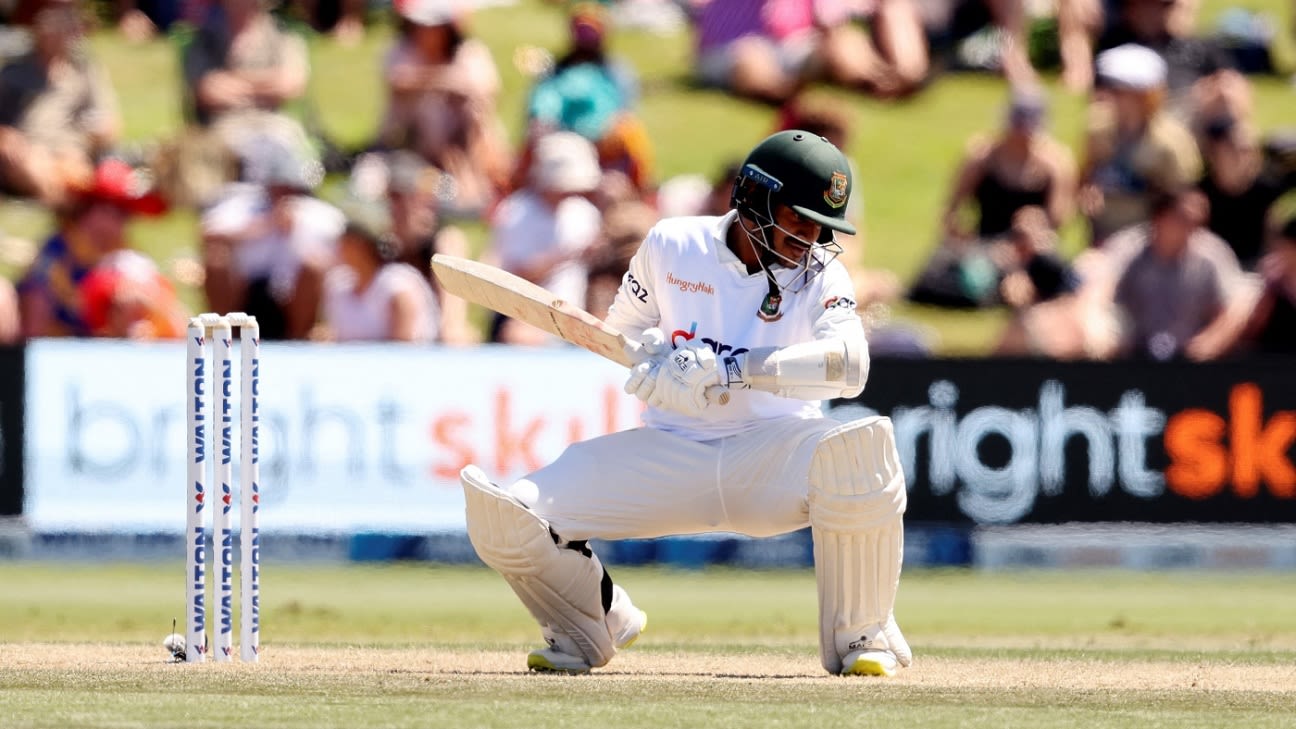 New Zealand cut down on Bangladesh’s scoring rate significantly but picked up only two wickets in the first session of the third day in the Mount Maunganui Test. The visitors added 45 runs in 26 overs, losing Mahmudul Hasan Joy who for 78, and Mushfiqur Rahim.

The key remains with captain Mominul Haque and Liton Das, unbeaten on 17 and 12 respectively, as they are the last remaining recognised batters. It’s not been an easy stay for Mominul though, who has struck just two fours in his 98-ball stay. Liton struck two fours towards the end of the session, giving a glimpse of his good form.

Neil Wagner took the first wicket of the day when he had Joy caught at gully in the third over. The catch went at a good height to Henry Nicholls. Joy added eight runs to his overnight 70. He struck seven fours in his 228-ball essay, but his slightly looser outlook perhaps cost him a maiden Test hundred.
What followed was a sustained period of pressure on Bangladesh’s two most experienced cricketers on tour. Mominul and Mushfiqur endured through their side’s slowest batting partnership when the two batters have combined to face 100-plus balls.

Mushfiqur hit the only boundary during the stand, a drive past mid-off, but that was perhaps the only delivery that Bangladesh’s most capped Test cricketer was allowed to free his arms at.

Shortly afterwards, Kyle Jamieson dropped a return catch from Mominul when he was on 8, a sharp chance that got away to the right of the tall fast bowler. About half an hour later and with Mominul having added just one more run, he inside-edged Wagner to be caught behind, but several replays showed that Wagner had over-stepped, leaving the left-arm quick furious with himself.

New Zealand finally broke through when Trent Boult got the newish ball to nip into Mushfiqur, who attempted a flick only for the ball to clatter into his stumps.

Bangladesh made a cautious start too when they replied to New Zealand’s 328. Shadman Islam fell after adding 43 with Joy, considered a bright start for a side that needed runs from their openers. Joy found a more energetic partner in No. 3 Najmul Hossain Shanto, who cracked seven fours and a six in his 64 off 107 balls. Shanto stressed on the ones and twos, which always ensured the New Zealand attack had to keep adjusting to the right and left-hand combination.

Joy took a bit of time to get going, but he laced together a few good shots including a straight drive. Shanto struck plenty down the ground, as well as a slogged sweep off Rachin Ravindra, that brought up his fifty. His best shot however was a cut shot he played against Wagner, moving well outside his leg-stump to make room. But Wagner had the last laugh in that battle, removing Shanto in the last hour. The uppish drive from the left-hander was caught at gully by Will Young.