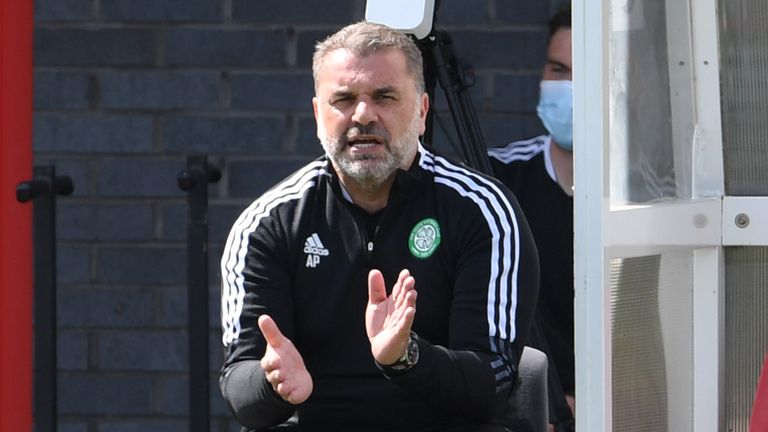 Kristoffer Ajer and Olivier Ntcham have both been left out of Celtic’s squad to face Midtjylland in the first leg of their UEFA Champions League qualifying second-round tie on Tuesday night.

The Norway defender and French midfielder were not included in the Hoops squad registered with UEFA ahead of their clash against the Danish side at Parkhead.

Ajer has had a fitness issue, but he has been heavily linked with a move to Brentford while there has been speculation about the future of Ntcham, who was sent out on loan to Marseille in the second part of last season.

When asked about the Norwegian following Saturday’s 1-0 friendly defeat by Preston, Celtic boss Ange Postecoglou said: “I’m concentrating on the ones who are involved.

“I can’t afford to waste time on anyone other than the ones who are here and committed to being here.”

Recent recruit Osake Urhoghide is in Postecoglou’s squad, but fellow new signings Liel Abada and Kyogo Furuhashi have not been included.

There is scope for Celtic to add two players to the squad before midnight on Monday.

Winners face PSV or Galatasaray in third qualifying round

Celtic will face PSV or Galatasaray if they beat Midtjylland in the second qualifying round.

Celtic are bidding to reach the group stage for the first time in four years, but they must first beat Denmark’s Midtjylland in their two-legged second qualifying round tie before taking on PSV or Galatasaray.

The first leg of that tie will take place at Celtic Park on Tuesday night, and will be Postecoglou’s first competitive game as Celtic manager.

Celtic will be away in their first legs of the third qualifying round, which will be played on August 3 or 4. The second legs will take place on August 10.

Celtic will play Czech side Jablonec in that competition if they cannot get past Midtjylland.

Keep up to date with all the action from Celtic Park via our live minute-by-minute match blog, with our coverage getting under way at 6.30pm on both the Sky Sports app and website.

SEC would be wise to follow Greg Sankey’s ‘vaccination motivation’

The U.S. women’s basketball team is heading to Tokyo with a goal of winning its seventh consecutive gold medal.

With the WNBA season paused for the 2021 Olympics, Team USA has loaded up with some of the country’s top talent. The women’s squad possesses a terrific blend of veterans (Sue Bird, Diana Taurasi) and youngsters (Ariel Atkins, A’ja Wilson), and it sure doesn’t hurt to have the reigning Finals MVP (Breanna Stewart) on the roster.

Can anyone challenge Team USA? Or will the Americans bring the gold home once again?

Here is everything you need to know to watch Team USA Olympic games, including the tipoff times and TV channels for each contest.

The opening ceremony at the 2021 Olympics is July 23. The women’s basketball tournament tips off two days later on July 25 and ends with the medal games on Aug. 7.

Team USA is one of 12 teams to qualify for the Tokyo Olympics. It will be playing in Group B. Its group-play opponents will be France, Japan and Nigeria.

USA Network is scheduled to broadcast all of the U.S. women’s basketball games live with encore showings on NBCSN later in the day.

Women’s basketball games can also be streamed online at NBCOlympics.com or with fuboTV, which offers a free seven-day trial.

TOKYO — Ryan Murphy won a silver medal at the Olympics here on Friday, then spent the aftermath creating an international stir around doping by claiming that his races, and swimming in general, were not clean.

“I do believe there is doping in swimming,” Murphy, a 26-year-old American, said. And he said an executive at FINA, the international swimming governing body, had told him as much.

Murphy sat a few feet away from Evgeny Rylov, the Russian who beat him earlier in the week and again on Friday in the 200m backstroke. Shortly after the race, Murphy had been asked whether he had any concerns about his opponents doping.

“I’ve got about 15 thoughts,” he said. “Thirteen of them would get me into a lot of trouble.”

The ones he eventually gave sent him, hours later, walking down a sidewalk outside the Tokyo Aquatics Center, a few reporters trailing him, one telling him that he’d “completely ruined Evgeny’s moment.” He said that wasn’t his intention. “Congratulations, Evgeny,” he said. His voice wavered as he spoke. “I want Evgeny to get his due.”

But Murphy had said what he’d said, and although he’d said it through a blur of post-race emotions, he believed it. “It is a huge mental drain on me to know throughout the year that I’m swimming in a race that’s probably not clean,” Murphy explained in the initial interview. “And that is what it is. The people that know a lot more about the situation made the decision they did. It frustrates me, but I have to swim the field that’s next to me. I don’t have the bandwidth to train for the Olympics at a very high level and try to lobby the people who are making the decision that they’re making the wrong decisions.”

Murphy never explicitly accused Rylov of cheating, but never explicitly said he thought Rylov was clean, either. Rylov, when asked about Murphy’s comments, said, “I have always been for clean competition,” but declined to address Murphy’s claims.

And Murphy never explicitly mentioned Russia, which is supposedly “banned” from these Games for a years-long state-sponsored doping scheme, but which has sent hundreds of athletes in white-blue-and-red tracksuits and uniforms to Tokyo under the “Russian Olympic Committee” label. When asked whether he believed the Russian Olympic Committee should be competing at these Olympics, Murphy said he didn’t “have time to get involved in this situation. But there is a situation. And that’s a problem. I’m sorry that there is a situation, but I don’t – I don’t know enough about it to give a 100% certain answer there.”

Speaking at a news conference before Murphy and Rylov arrived, Great Britain’s Luke Greenbank, the bronze medalist in the event, also didn’t mention Russia, but connected the dots: “Obviously it’s frustrating, as an athlete, having known that there is a state-sponsored doping program going on.”

Rylov then arrived, and moments later Murphy did, and Rylov gave him a head nod, apparently unaware of what Murphy had said earlier, and thus began the most tense and awkward news conference of these Olympics.

Murphy was asked, specifically, whether he thought the 200-meter backstroke final that he’d just swum was clean.

Rylov was immediately asked: “Do you think they’re referring to you?”

“I have always been for clean competition,” Rylov said in Russian. “I’m always tested. I’ll fill out all the forms. So from the bottom of my heart, I’m for clean sport. … So I don’t know how to react to that. Ryan didn’t accuse me of anything, therefore I’d rather not react.”

Murphy then faced pressure to back up his allegations, and revealed that at U.S. Olympic trials last month, he’d had a conversation with new FINA executive director Brent Nowicki. Murphy said that Nowicki, a fellow American, told him: “It’s gonna be hard, and it’s gonna take a long time to clear this sport of doping.”

“So when you hear that from the top, that’s tough to hear,” Murphy said. “And so, that is — yeah, that’s what I believe.”

Yahoo Sports has reached out to FINA for comment.

Murphy was stoic and measured throughout the news conference. A foreign reporter asked him about Justin Gatlin, the American sprinter found guilty of doping. Murphy defended the U.S. anti-doping system, and said it wasn’t “apples to apples.” After a moderator thanked the three swimmers for their time, and as Rylov posed for selfies with a few Russian reporters, Murphy got up to leave, but almost looked, for a split-second, as if he had more to say.

Twenty seconds later, outside the venue, when asked if he did, he stopped, and that’s when the gravity of the sudden firestorm he’d created began to hit him. “I’m not accusing anyone of anything,” he clarified. He tried to reframe his original answer in a milder way. As he walked away, a reporter chased him and told him that his comments had “taken all the focus away from all of your victories,” and that “it’s just completely dominated everything now, and will dominate probably for the rest of the event.”

And then he kept walking. Manchester United cancelled its pre-season friendly at Preston North End on Saturday after a small number of suspected positive COVID-19 cases at the club, the Premier League side said on Thursday.

United drew 2-2 with Brentford on Wednesday and detected the cases following routine testing of the team.

The game was called off as a precautionary measure based on COVID protocols, United said, with identified individuals now isolating pending further tests.

“At this stage, we do not expect further disruption around our forthcoming matches, but we will continue to follow Premier League protocols in this regard,” the club added.

United’s only remaining pre-season friendly is against Everton at Old Trafford August 7, a week before it hosts Leeds United in its Premier League season opener.