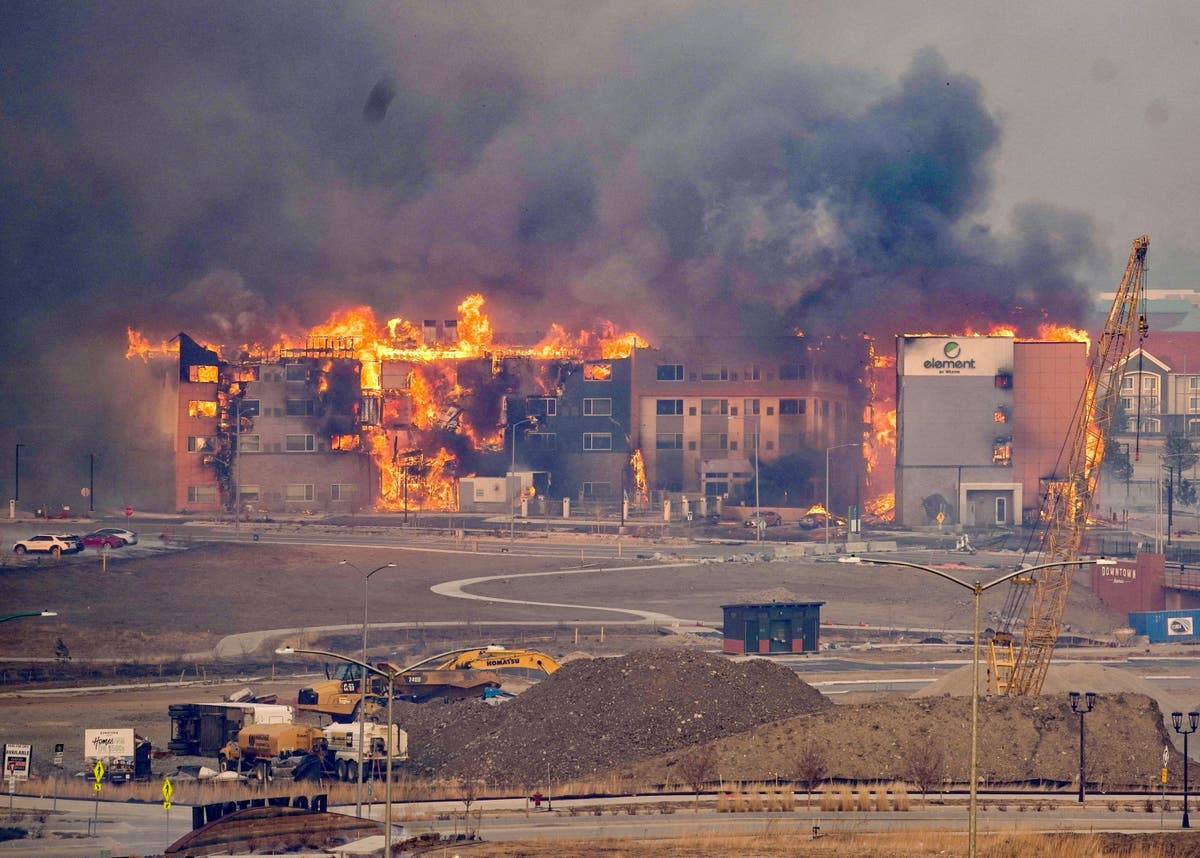 The acrid smell of smoke still hung in the air on Friday as snow began to fall outside the YMCA in Lafayette, Colorado – where a line of cars snaked at least a mile back from the building being used as one of several evacuation centres a day after historic wildfires devastated the region.

One elderly woman, pulling up in a grey SUV, asked for several cases of water for her family – then burst into tears when asked about her experience, unable to talk further.

The YMCA of Northern Colorado was one of a half-dozen evacuation centres – including sites designated for those infected with coronavirus – set up after fires in Boulder County, Superior, Louisville and surrounding areas destroyed more than 600 homes and businesses on Thursday. That number was expected to rise as authorities surveyed the damage from the most devastating blazes in Colorado history.

About 30,000 people were told to evacuate from their homes as the fires – fuelled by dry conditions and high winds – raged just about 25 miles from Denver. Most badly-hit areas remained closed off on Friday.

In Lafayette, the Red Cross and other volunteers were looking after the displaced, many of whom seemed still in shock. Cots were set up throughout the YMCA, which was overloaded with donations of food and supplies, as shell-shocked Coloradans waited for word that they could return to their neighbourhoods.

Earlier on Friday, authorities begged residents to avoid checking on their homes until areas were deemed safe. Many locals still didn’t know whether their houses had survived.

Most of the roads were still closed that led to the worst-hit areas. At least six inches of snow was expected on Friday and snowfall was intensifying in the afternoon.

Kathy Patterson, of Old Town Louisville, and her teenager daughter were among the lucky ones whose homes remained untouched – but they and Ms Patterson’s parents next door were struggling with a lack of heat.

“Thank God for the snow, but again – now we have to worry about frozen pipes,” Ms Patterson told The Independent. “The whole town of Louisville has no gas … we talked to the gas guys, and they were going around to individual houses cutting off the main meter.”

She was told “it might take a few days, because they have to isolate the burn area and cut off their gas before everybody’s back on again.”

She and her daughter, Samantha, had noticed the smoke around 11am on Thursday and made a three-minute drive to survey the fire from a different vantage point.

The area they’d watched from would later be completely decimated, they told The Independent.

“It’s all gone,” Samantha said. “We were sitting there near the houses” that were burnt to the ground.

Her mother added: “Everybody, all of our friends, all evacuated – and we have close friends that lost their entire neighbourhood.”

Another Louisville resident, 72-year-old Cindi – who did not want to give her last name – was sitting in the same YMCA chair on Friday that she slept in overnight. She, too, had warily watched the fires from her apartment building, packing up clothes, medicine and important papers as she anticipated an evacuation order.

“I didn’t know what to do,” she told The Independent. “I was panicked.

“I was just kind of watching it for a couple of hours before it started getting really weird … and I got a call from Boulder County that they were evacuating.”

She headed with her packed items to multiple safe sites before ending up at the YMCA along with scores of flustered, scared locals.

As she spoke from the lobby of the building, tables just feet away were being manned by masked volunteers and offering sandwiches, blankets, water and friendly words.

A few minutes later, one volunteer – 39-year-old healthcare worker Autumn Kreutz – walked up to the YMCA with a colleague.

“We had about seven of our clients that were affected by [the fires], so duty calls – volunteering, making sure they’re okay, making sure everybody’s okay,” she told The Independent. “Just doing what we’ve got to do.”

That same spirit was evident from the donations so plentiful that volunteers were offering food to the media. Ms Kreutz, who has worked all over the country, said the response was “awesome”.

”It’s amazing when something happens – through the pandemic, through everything – people are still coming together, doing what they need to do. And that’s what’s important.”

Even she seemed somewhat in disbelief, however.