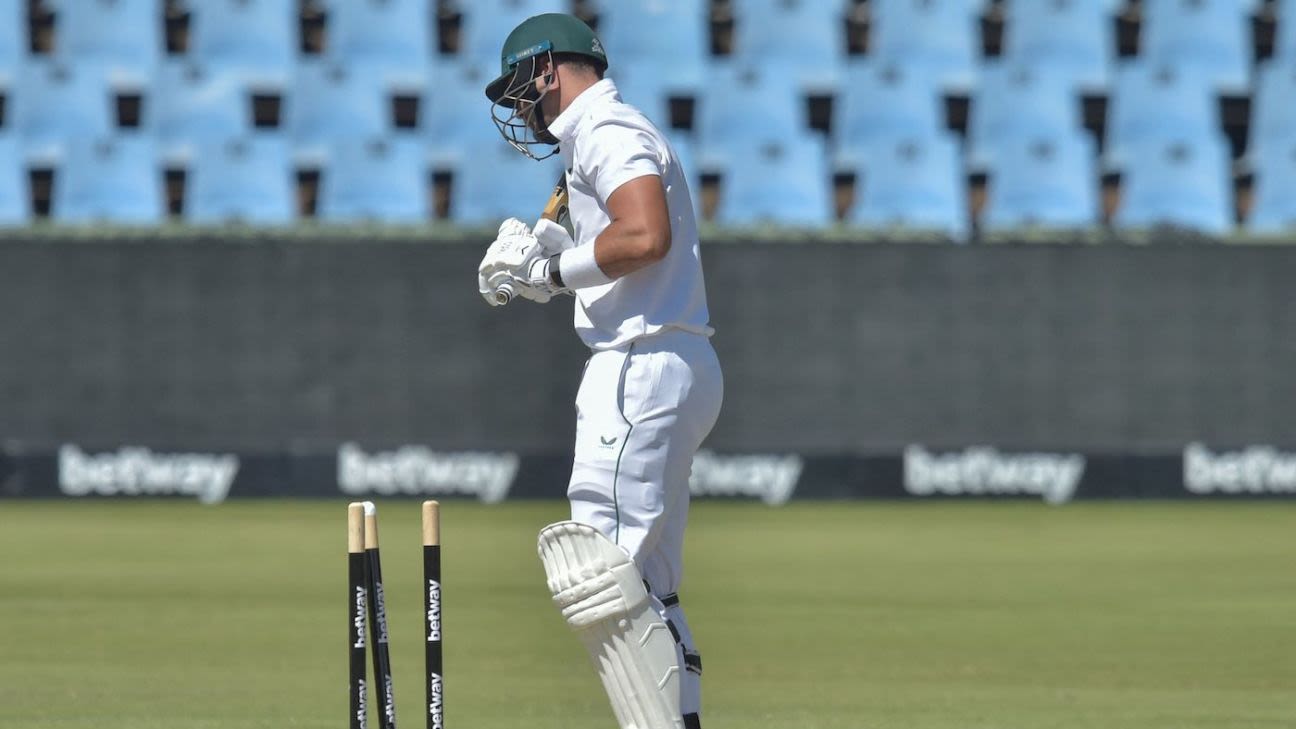 Lack of runs in their first innings rather than leaking runs in India’s first cost South Africa the opening Test against India, according to captain Dean Elgar. After conceding 272 for 3 on the first day, thanks largely to a wayward morning with the ball, South Africa went on to take 7 for 49 on the third to bowl India out for 327. They were then dismissed for 197, where Elgar said the match was lost.

“You need runs to compete and it’s safe to say we didn’t get that in our first innings,” Elgar said. “They bowled well with the new ball and the nature of Test cricket is that you’ve got to compete against the new ball. The way they started was something we struggled against. We know what it’s like scoring 250-plus runs here.”

Just last year, South Africa piled on 621 runs on this ground, albeit against an under-strength Sri Lankan attack, and in four of their last five Tests here, they scored over 250 in the first innings. That they went on to win all those matches makes clear the importance of first innings runs, but for that you need a strong and somewhat reliable line-up, which can only be achieved with regular competitive game time against quality opposition.

There is an obvious lack of match time, which both vice-captain Temba Bavuma and Elgar recognise as a weakness.

“Playing four or five-day cricket is something you can’t replace but the schedule doesn’t allow for our players to play a lot of first-class cricket,” Elgar said. “So there’s a little bit of (a lack of) match awareness and match fitness. It’s by no means an excuse. We knew that coming into the series. There’s a lot of learning for us that the basics of the game still applies. I don’t think we had that with regards to the batting.”

You may immediately ask why Petersen, the only one who played in this Test who has sufficient match practice to his name, was not more successful but there’s a reason for that too. South Africa’s opening stand has been particularly poor and has not crossed double figures in the three Tests Petersen has played.

“KP has come in and played in three Tests matches and the three batting conditions that he has experienced have been relatively tough,” Elgar said. “He has had a bit of a rough start and it doesn’t reflect on him as a player. He is an extremely talented player – one of our better players in the first-class system. The stats don’t reflect his ability. I feel for him. I know he wants to make a play and is maybe a little bit anxious. We need to, as a leadership group, try and give him a better opportunity to try and contribute.”

In order for that to happen, Elgar and Aiden Markram have to start better, which they know but can’t guarantee. “In Test cricket facing the new ball and opening is not easy. You get a good ball and you go and sit and watch the rest of the game. That’s the nature of the beast,” Elgar said. “Aiden and I have had the rough of the green but we are very mindful that we need to start well.”

Another option is to swap Petersen with the (slightly more) experienced Rassie van der Dussen. “It is something that will be a conversation,” Elgar said.

So will changes to the lower order. Olivier should be available for selection and should be an automatic pick at the Wanderers. Ordinarily, that would mean leaving out his replacement Marco Jansen. But the 21-year-old acquitted himself so well in his first Test that the discussion will turn to whether Wiaan Mulder, playing as an allrounder but not really contributing with the bat, should be benched to give Jansen the chance to stake a claim in that position.

“Wiaan had a pretty good game with the ball. He is not living up to his standards with the bat which is something we will chat to him about,” Elgar said. “In this environment you have to have those open conversations in order for this environment to grow and for individuals to grow. Marco had a brilliant debut. He was our player of the game. And he came into a really tough situation. He didn’t shy away from his responsibilities within the side.”

And Elgar is not hiding from his – as captain of a team that has to turn the corner soon and is feeling more and more sure that they can in three days’ time. “I don’t think we’ll lack any confidence heading into Johannesburg but it’s never nice losing a game especially when we know where we went wrong,” Elgar said. “It’s difficult to correct those wrongs during a game, but building into the second Test, we’ll have some time to reflect around what has happened.”