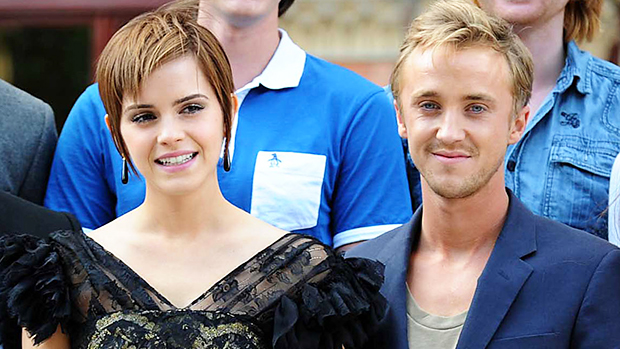 Emma Watson and Tom Felton both admitted that they’ve ‘always loved each other’ during the ‘Harry Potter 20th Anniversary’ special, and Emma weighs in about whether or not she’s ever been in a romantic relationship with Tom.

Despite their Harry Potter characters being at odds, Emma Watson and Tom Felton have a close bond after spending so many years working together. During the Harry Potter 20th Anniversary: Return to Hogwarts special, Emma and Tom open up about their love for each other. “Emma and I have always loved each other, really,” Tom says.

Emma also explains the moment on set when she actually “fell in love” with Tom. “I walked into the room where we were having tutoring,” she says. “The assignment that had been given was to draw what you thought God looked like, and Tom had drawn a girl with a backward cap on a skateboard. And… I just don’t know how to say it, I just fell in love with him.”

Emma admits that she “used to come in every day and look for his number on the call sheet. It was #7 and if his number was on the call sheet it was an extra exciting day.” Tom gushes that he “became very protective over” Emma because he’s 3 years older and has “always had a soft spot for her and that continues to the day.”

But has their relationship ever taken a romantic turn? “Nothing has ever, ever, ever, ever happened romantically with us. We just love each other. That’s all I can say about that,” Emma reveals.

For Emma, she’s always felt that she could be “more vulnerable” with Tom than any other person. Tom calls their relationship a special “kinship.”

Emma and Tom met after they were cast as Hermione Granger and Draco Malfoy in Harry Potter and the Sorcerer’s Stone. They starred in all 8 movies together over a decade. They may be done filming the Harry Potter movies and have been for a decade, but their relationship is truly a bond that can never be broken. Harry Potter 20th Anniversary: Return to Hogwarts is now streaming on HBO Max.