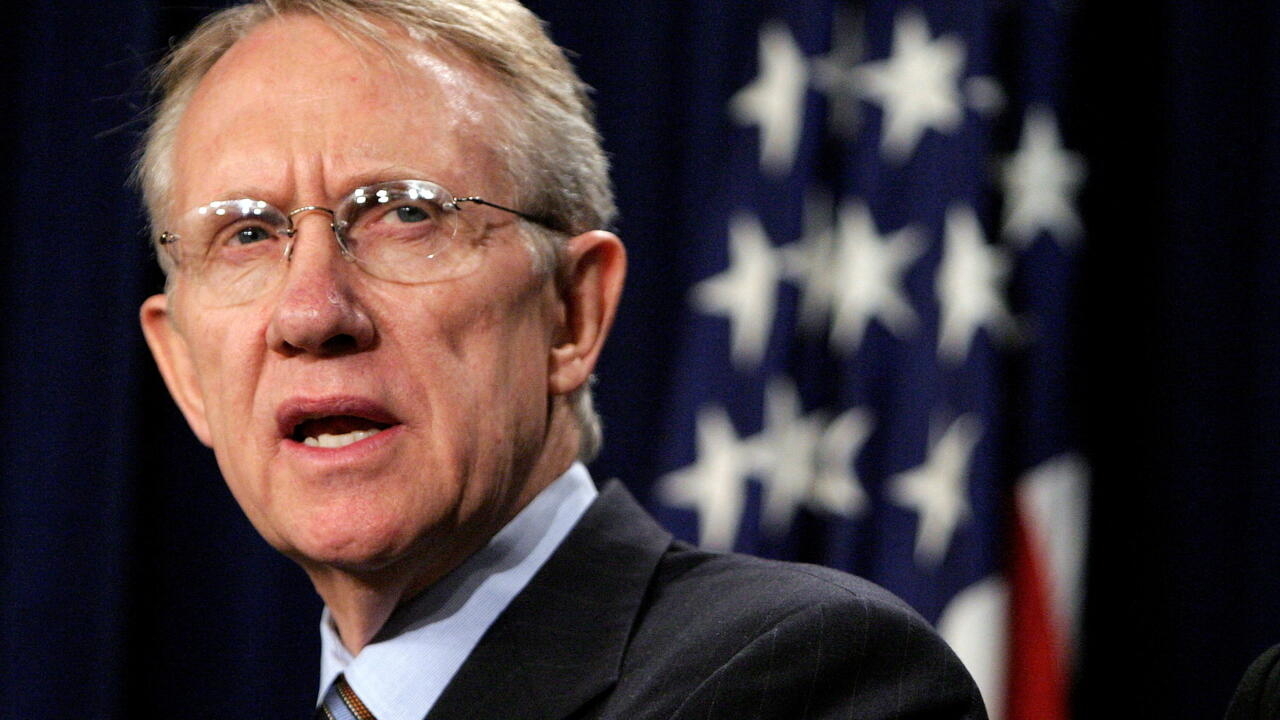 Harry Reid, the pugnacious son of a Nevada hard-rock miner who rose from poverty to become the U.S. Senate majority leader and earned a reputation as a fierce partisan fighter during an era of political gridlock in Washington, died on Tuesday. He was 82.

Reid, a former amateur boxer who represented Nevada in the U.S. Congress as a Democrat for more than three decades, died after a long battle with pancreatic cancer, his wife of 62 years, Landra, said in a statement.

“We are so proud of the legacy he leaves behind both on the national stage and his beloved Nevada,” Landra Reid said.

Obama on Tuesday posted to social media a recent letter he had written to Reid:

“You were a great leader in the Senate, and early on you were more generous to me than I had any right to expect,” Obama said in the letter. “I wouldn’t have been president had it not been for your encouragement and support, and I wouldn’t have got most of what I got done without your skill and determination.”

Reid retired in 2016, one year after suffering broken ribs and facial bones, and injuring an eye in an accident while exercising at home.

He had ascended to the job of majority leader in 2007 after the Democrats won control of the Senate. Despite being a political moderate who differed from others in his party on abortion, the environment and gun control, Reid regularly clashed with the Republicans and maintained poor relations with the opposition party’s congressional leaders.

“I always would rather dance than fight but I know how to fight,” Reid said in 2004, in a reference to his boxing career.

In 2012, Mitch McConnell, then the Senate’s top Republican, labeled Reid “the worst leader in the Senate ever” while Reid accused McConnell of a breach of faith on an important issue.

During Reid’s time as majority leader, major legislation languished because Democrats and Republicans could not make compromises. His relationship with McConnell was so strained that the Republican leader shunned Reid during crucial U.S. fiscal policy talks and dealt directly with Vice President Joe Biden.

In 2013, fed up with Republican procedural moves blocking Obama’s judicial and executive branch nominees, Reid pushed through the Senate a historic change to the Senate’s filibuster rules, preventing a minority party from blocking presidential appointments except those to the Supreme Court.

“There has been unbelievable, unprecedented obstruction,” Reid told his fellow senators, referring to the Republicans. “The Senate is a living thing and to survive it must change as it has over the history of this great country.”

Republicans said the move was a naked power grab.

Reid was first elected to the House in 1982 and was sent to the Senate by Nevada voters in 1986. He showed remarkable resilience, fighting off spirited re-election challenges.

Tact was not Reid’s strong suit. He called Republican President George W. Bush a “loser” and “liar” and said Federal Reserve chief Alan Greenspan was “one of the biggest political hacks we have in Washington.”

He apologized in 2010 for referring to Obama, the first black U.S. president, in private conversations two years earlier as “light-skinned” with “no Negro dialect,” saying, “I deeply regret using such a poor choice of words.”

Reid became a Mormon as a young man and eventually became the highest-ranking member of the Church of Jesus Christ of Latter-day Saints in U.S. public office.

Harry Mason Reid was born into a poor family in the tiny desert mining town of Searchlight, Nevada, on Dec. 2, 1939. His father was a hard-rock miner with an eighth-grade education who committed suicide in 1972.

His mother, who never finished high school, took in laundry from brothels to help out financially. The family lived in a small cabin with no indoor plumbing, hot water or telephone.

“I learned in America, it doesn’t matter the education of your parents, what their religion is or isn’t, their social status – we had none – the color of their skin or their economic status. I am an example of this. If I made it, anyone can,” Reid said during a 2007 speech.

Reid attended a two-room school through eighth grade, then hitchhiked 40 miles (64 km) each week to high school, boarding with local families before hitchhiking home each weekend.

He graduated from Utah State University in 1961 and then worked nights as a U.S. Capitol policeman while he attended law school at George Washington University in Washington. He earned his law degree in 1964 and moved back to Nevada.

Reid was a trial lawyer and held various Nevada state offices. He headed the Nevada Gaming Commission from 1977 to 1981, a post in which he combated organized crime’s influence in the state’s casinos and endured death threats from mobsters.

In the Senate, Reid won passage of an ethics measure barring senators from accepting gifts, meals or trips from lobbyists in 2007.

He voted for Iraq war resolutions in 1991 and 2002. While Reid remained a backer of the first Iraq war, he reversed himself and opposed the second one, accusing Bush’s administration of misleading the nation into it.

Reid triggered a political firestorm when he declared in 2007 that the Iraq war, launched by Bush in 2003, was “lost.” Reid rejected Republican demands for an apology but sought to clarify by saying the war was lost unless Bush changed course.

Reid and his wife, Landra, had five children.