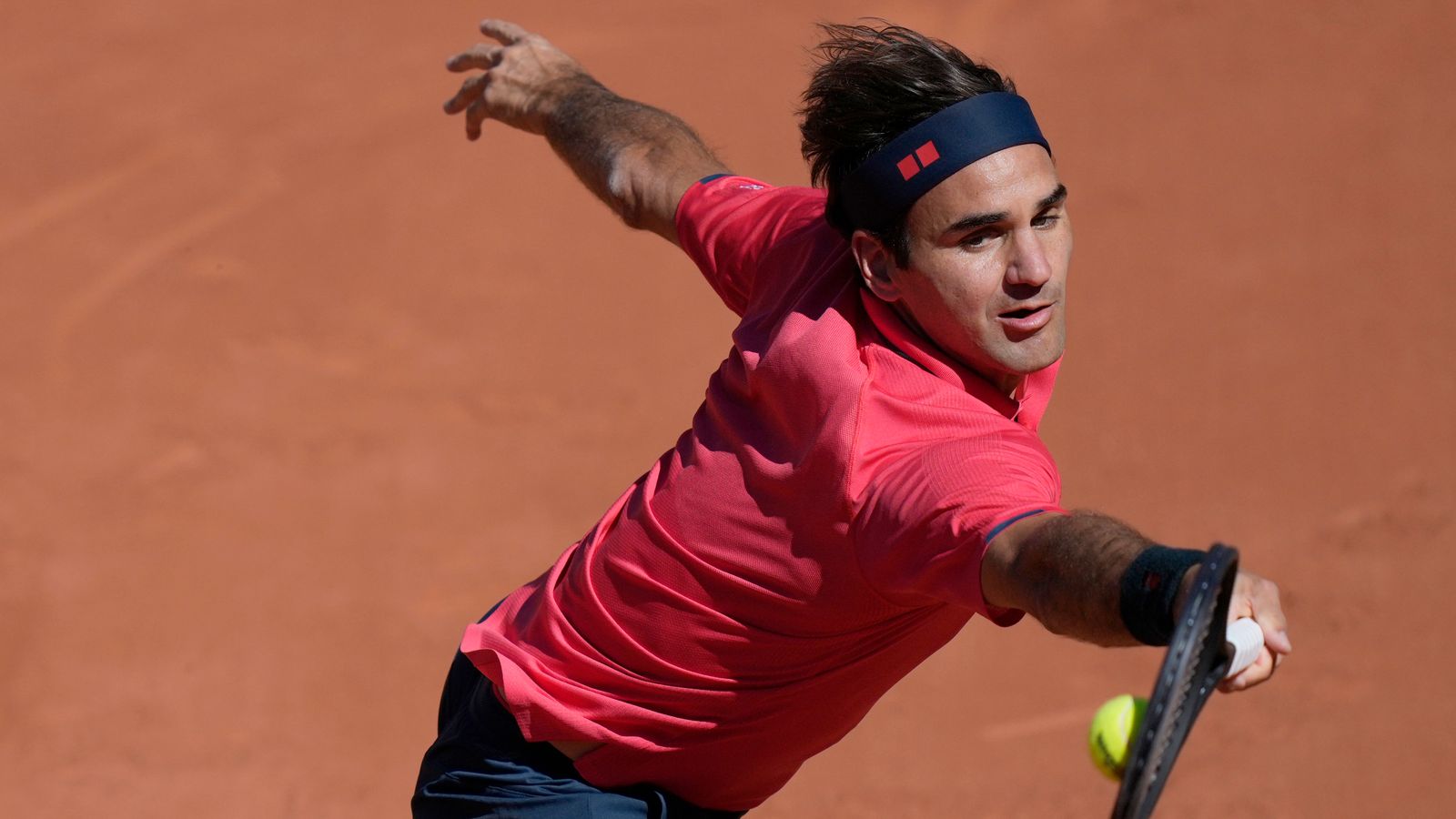 Federer cruised through to the second round with a 6-2 6-4 6-3 win over Denis Istomin, in just his second Roland Garros appearance since 2015; the Swiss icon could face former US Open champion Marin Cilic in round two

Roger Federer marked his return to Grand Slam action with an emphatic straight-sets win over fellow veteran Denis Istomin in the opening round of the French Open.

Federer – featuring in his first Grand Slam tournament for 487 days – produced a virtuoso display to prevail 6-2 6-4 6-3 in just 93 minutes, to the delight of the 1,000 fans in attendance in Paris.

The Swiss legend made the perfect start to proceedings, breaking the Istomin serve in the opening game, which set the foundations for a dominant first set.

The 39-year-old was impregnable on his own serve in the early exchanges – landing 18 of his 20 first serves in the opener, at a staggering ratio of 95 per cent.

Federer has only featured sparingly since undergoing knee surgery last year, yet the eighth seed still displayed his trademark artistry and elegance on his return to the Philippe Chatrier Court.

Istomin was unable to contend with the variation in Federer’s play – the forehand slice was a particularly effective weapon for the 2009 champion, who struck 48 winners en route to victory.

The second set was a tighter affair, although the solitary break of serve in the third game was sufficient for Federer to double his lead, as he closed out set two with three consecutive exchanges at the net, followed by an ace to seal the deal.

Istomin was unable to fashion out any opportunities on the Federer serve, therefore when the irrepressible Swiss broke midway through the set with a crunching cross-court forehand, there was a sense of inevitability about the outcome.

Federer, who had triumphed in all seven of his previous meetings against his Uzbek opponent, continued to dazzle with some sublime groundstrokes, closing out a comprehensive victory to book his place in the second round.

The 20-time Grand Slam champion, who will turn 40 in August, is pitted alongside top seed Novak Djokovic and 13-time winner Rafael Nadal in the top half of the draw, as he bids to become the first man in the open era to win every Grand Slam title twice.

Nevertheless, next up for Federer is a second-round assignment against former US Open champion Marin Cilic, who cruised past Arthur Rinderknech in straight sets.

The 25-year-old Russian ended a run of four consecutive opening-round exits on the Paris clay with victory over Bublik in just under two hours, and following Dominic Thiem’s shock exit on Sunday, there are no Grand Slam champions remaining in his half of the draw.

How to get the Specialist Bonus in Call of Duty: Warzone

Copa America 2021: Why Argentina and Colombia were stripped of hosting duty

Belinda Bencic and Marketa Vondrousova will face off in the Gold medal match of the women’s singles category in the Tokyo Olympics. Bencic, the ninth seed, navigated her path into the final by defeating Elena Rybakina 7-6(2), 4-6, 6-3 and will be the first Swiss to win two medals in the same Olympics campaign after she progressed to the doubles final as well.

The 24-year-old is also the fifth player to reach two finals at the same Olympics after Serena and Venus Williams, Andy Murray and Nicolas Massu. Marketa Vondrousova has stunned one and all in the tournament, beating Naomi Osaka in round 3 (6-1, 6-4) and 4th seed Elina Svitolina (6-3, 6-1) in the semifinals. She is the first Czech player to make the Olympic singles player and will hope to crown the moment with glory.

The duo have only met once previously in their careers, with Vondrousova earning a hard-fought three-set win over Bencic in Miami earlier this year. Vondrousova is no stranger to making it big, as she reached the French Open finals as a teenager, and achieved a ranking as high as 14. However, Bencic has had a more storied career, having teamed up with Roger Federer for Switzerland in the past, and achieving a career-high ranking of four in February last year.

Belinda Bencic road to the final

Marketa Vondrousova road to the final

Tokyo Olympics will be broadcasted on DD National. Follow all matches LIVE from Tokyo Olympics on InsideSport.co & Watch LIVE streaming on SonyLIV.

‘Beginning of an historic moment’: First group of Afghan allies who aided military arrive in U.S.