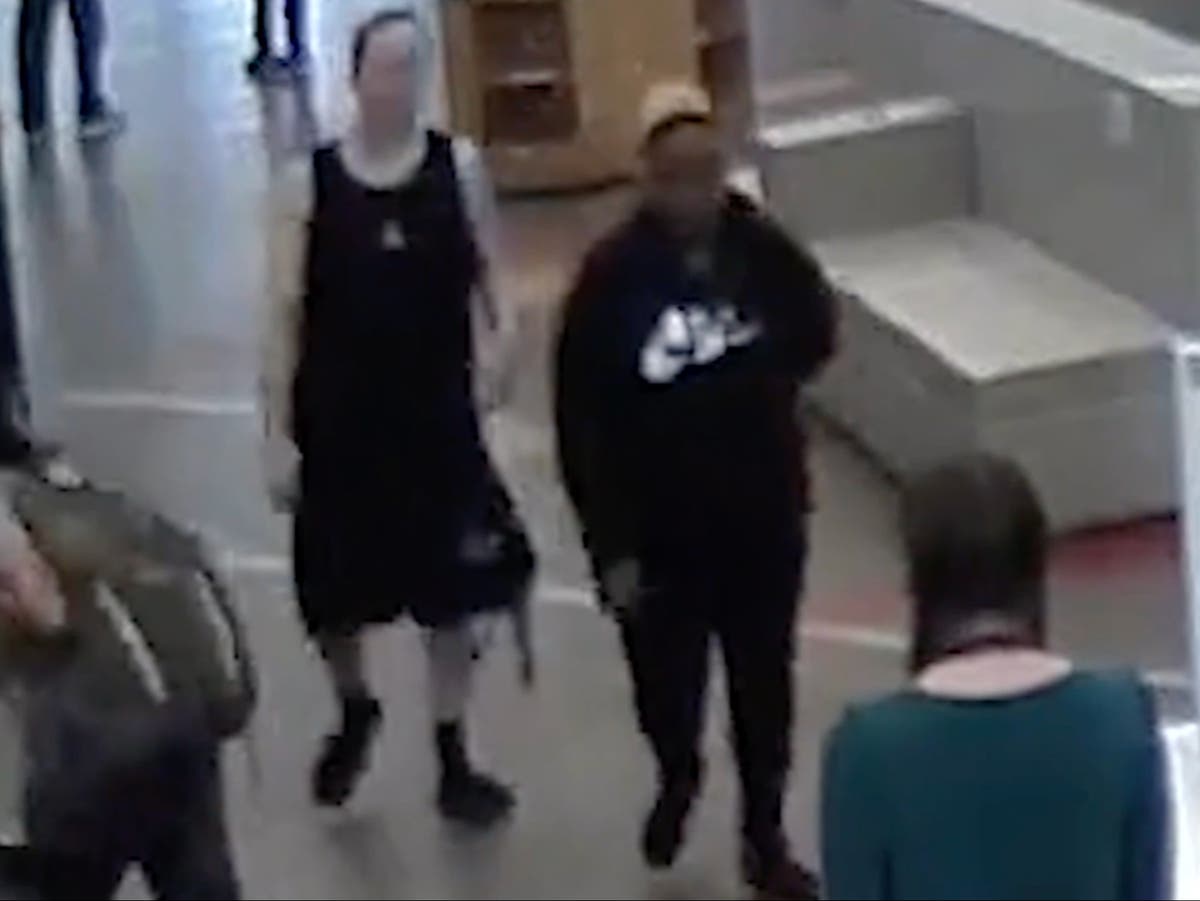 A mother and her boyfriend were filmed at a library where they were reading articles about their case as they abandoned her children with their brother’s body decaying in the unfurnished apartment’s bedroom.

They entered the building at 4.42pm and immediately walked up to a library employee, appearing casual and relaxed.

The visit to the library took place two days after Ms Williams’ 15-year-old son called emergency services and informed the Harris County Sheriff’s Office that he and his two brothers had been abandoned in an apartment in Westside while the body of another brother lay rotting in the bedroom.

The children were in the custody of child protective services while the couple were at the library.

Ms Williams’ bond was increased to more than $1.5m last week. The bond for Mr Coulter has been set at $1m. Court documents reveal that the boys told investigators from the Harris County Sheriff’s Office that they saw their brother being beaten to death by Mr Coulter in November last year. His body was left in the bedroom for nearly a year.

ABC13 reported that the couple were looking up news articles about their own case during their library visit. Ms Williams can be seen in the video leaving the library carrying a piece of paper.

As they walk to their car, sheriff’s deputies close in and arrest them.

Investigators think that the three siblings were left to take care of themselves, leading to the 15-year-old calling 911 for help on 24 October. He was found along with his 10-year-old and seven-year-old brothers. Ms Williams also has two daughters, but they were not at the apartment.

Prosecutors said in court on Friday that Ms Williams was the benefactor of government aid for two of her children, including the late Kendrick Lee, who had learning disabilities, and the older of her two daughters. She was receiving around $2,000 a month, ABC13 reported.

“I am satisfied,” prosecutor Andrea Beall said as Ms Williams’ bond was increased. “We can’t seek no bond, and I believe the judge takes public safety into factor because this is such an egregious case.”

“We knew the judge was going to raise the bond,” Ms Williams’ defence attorney Neal Davis said. He added that the public opinion of the case will be hard to surmount.

“She is the mother, and I’m not going to be able to paint right now any other picture than what’s perceived by the public,” Mr Davis said. “Just from the basic facts of the case.”

Retired district court judge Mike Schneider told ABC13: “This is a crucial time in these kids’ lives right now, as to whether they’re going to do well or not.”

“Ideally, you want to look for relatives or what’s called ‘fictive kin,’ people [who] might have had a long relationship with these kids,” Mr Schneider added. “Unfortunately, there’s going to be a lot of scrutiny on anyone who claims to be a relative or friend of these kids, because the first question will be, ‘Where were you?’ The second thing that’s extremely important is to keep these kids together, if at all possible.”

Texas Department of Family and Protective Services spokesperson Melissa Lanford told the local TV station: “I know public interest, in this case, remains very high. I can only say the children are in foster care and continue to receive the services they need to heal.”

“I’ve seen kids who’ve endured some of the worst abuse and neglect who have remarkable success stories,” Mr Schneider added.

Mr Coulter faces a murder charge and is in jail awaiting a court appearance on 15 December. Prosecutors said the couple lived in a different apartment from the boys, and that theirs was fully furnished while the boys’ was left bare.

Family members of Ms Williams’ late husband, Daryl Wayne Towner, spoke to ABC 13 on Friday. They said he loved the children as if they were his. Mr Towner’s sister Carol Towner said they met at a homeless shelter after her brother was released from prison. Ms Williams was reportedly staying at the shelter with four of her children, Kendrick being one of them.

Ms Towner told the outlet that her brother would often see Ms Williams and her kids at a McDonald’s.

“He said he felt bad because the kids were hungry, so he kept feeding them,” she said. “I guess they kind of got together by accident, but he told us he fell in love with those kids.”

Ms Towner said they have contacted the authorities in an attempt to see the children, but have not received a response.

“We just want them to see a familiar face,” Ms Towner told ABC13.