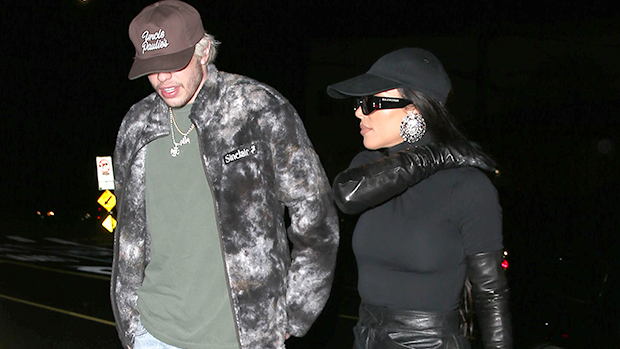 After more than two months of dating, Kim Kardashian and Pete Davidson are taking their relationship on a romantic getaway, and they were photographed at the airport ahead of the trip on Jan. 3.

Kim Kardashian and Pete Davidson boarded a private plane at an airfield in California on Jan. 3. In photos, which you can see here, the hot and heavy couple could be seen exiting a black SUV and heading to the private jet. Kim wore all black for the flight, while Pete was in a white ensemble, consisting of long sleeves and shorts. The two were reportedly headed to the Bahamas on their romantic getaway.

Kim and Pete’s Bahamas trip comes after the two spent New Year’s Eve separately. Pete was in Miami to host a New Year’s Eve special on NBC alongside Miley Cyrus, while Kim was back home in California with her kids. Luckily, they didn’t have to wait too long before being able to reunite! Pete also spent time with Kim in California ahead of Christmas and the day after, although he was not seen in any photos from her family’s low-key Christmas Eve celebration on Dec. 24.

Things have been heating up between Kim and Pete ever since Kim was a host on Saturday Night Live at the beginning of October 2021. She and Pete shared a kiss during one of their sketches, and were spotted hanging out with a group of friends by the end of the month. At the beginning of November, Kim spent some time in New York, and even ventured out to Pete’s native Staten Island for a special date night with the comedian.

Kim is currently in the midst of a divorce from Kanye West. She filed for divorce in Feb. 2021, but the split has not been finalized yet. However, at the end of 2021, Kim asked a judge to declare her and Kanye “legally single” as the logistics of the divorce are worked out. Meanwhile, Kanye has been publicly trying to win Kim back, but has also been romantically linked to a few different models in the past few months. Most recently, he was seen hanging out with Julia Fox in Miami