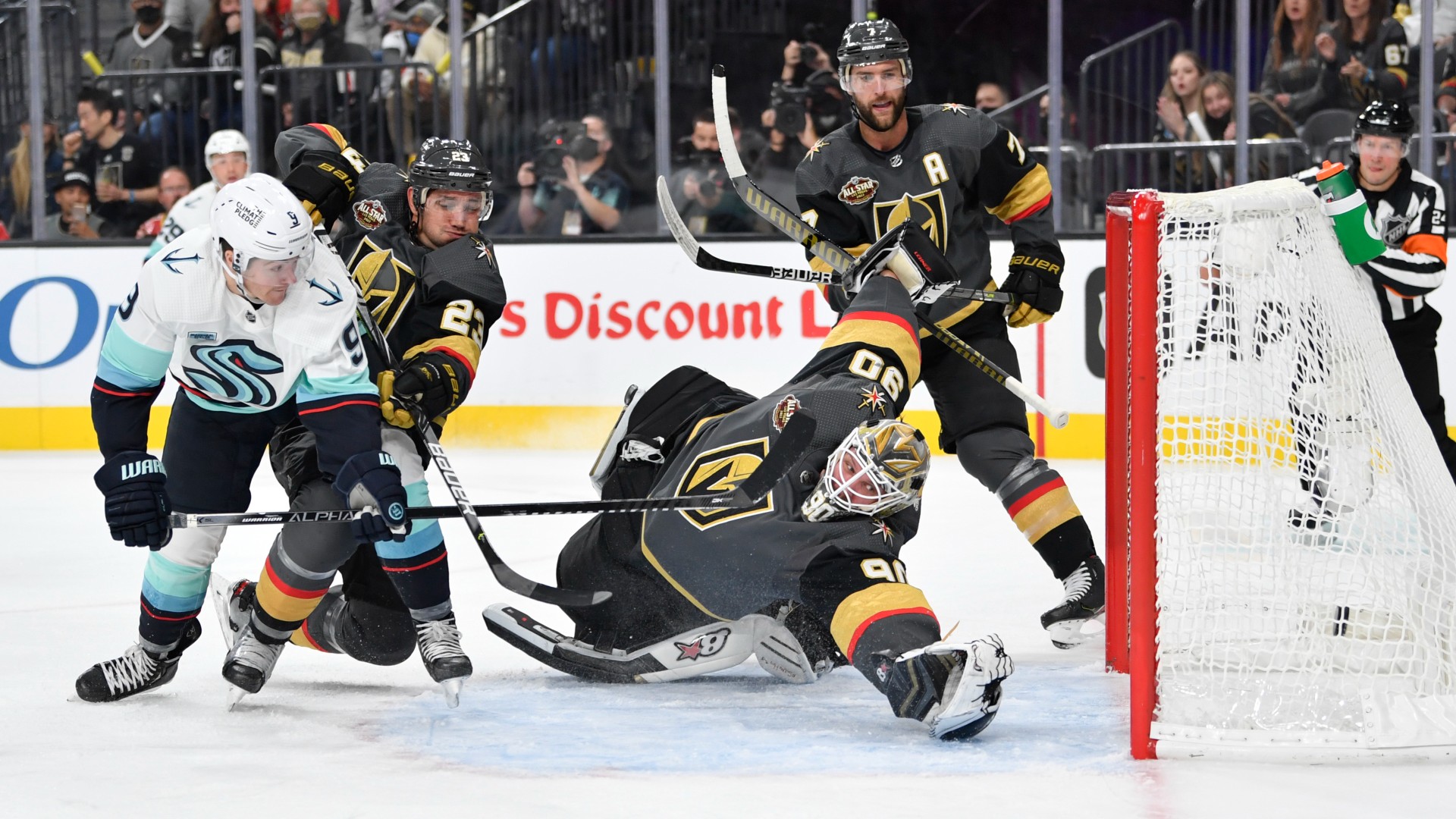 by Paul Walker
The NHL’s newest team hit the ice for the first time in its history on Tuesday night and, while the Kraken didn’t skate away the winners, they still made some history.  In a battle of the league’s two newest franchises, it was the older kids — the Golden Knights — who won 4-3. While the Kraken came out... Read More

IT’S OFFICIAL: The Dolphins locked in as the 17th NRL team
Wait… why isn’t Kyle Shanahan on the hot seat?

The NHL’s newest team hit the ice for the first time in its history on Tuesday night and, while the Kraken didn’t skate away the winners, they still made some history.

In a battle of the league’s two newest franchises, it was the older kids — the Golden Knights — who won 4-3. While the Kraken came out with some jump and got an early chance by Jordan Eberle that rang off the pipe and a power-play opportunity, it was Vegas that cashed in early. The Golden Knights scored two goals in the opening seven minutes — one by Max Pacioretty and one by Jonathan Marchessault — before adding a third less than seven minutes into the middle frame.

But then the Kraken were unleashed (sorry, not sorry).

Ryan Donato scored the first goal in franchise history from atop the paint. Then, 72 seconds later, it was Jared McCann with the marker. McCann was one of three players who were initially thought to be out of the game due to COVID protocols earlier in the day but were cleared before warmups. (Joonas Donskoi and Jamie Oleksiak, who is credited with taking the first penalty in franchise history, were the other two.)

In the third period, Morgan Geekie tied it up with an absolute snipe from the right circle. However, the proverbial “new game” was short-lived as 35 seconds later Vegas’ Colin Stephenson redirected the puck in with his skate for the game-winner.

While the Kraken’s first game is the Kraken’s first loss, the comeback showed that this is a team that shouldn’t be taken lightly. They enter the game without too much pressure to do too much this season despite what the Golden Knights did in their inaugural season in 2017-18 when the club won the Pacific Division and went all the way to the Stanley Cup Final.

Sporting News had all the action as the Kraken got crackin’ and hit the ice for the first time in the regular season (all times Eastern).

12:38 a.m. — Fleury with a chance and at the whistle Stone is called for tripping. It’s a 4-on-3 as there were coincidental minors to Larsson and Stephenson.

12:30 a.m. — GOAL  … maybe. Off a turnover 35 seconds after Seattle tied it, Mark Stone feeds the puck over to Colin Stephenson who has the puck go off his skate. He angles his skate but does he kick? It is being reviewed and it is a good goal. Vegas leads 4-3.

12:18 a.m. — Kraken come close but there was a quick whistle despite the puck being loose.

12:15 a.m. — Third period underway. Can the Kraken finish the comeback?

11:45 p.m. — GOAL. Here come the Kraken. Jared McCann with the centering pass and it gets past Lehner (originally this was credited to Eberle). Seattle with two goals 72 seconds apart.  Vegas leads 3-2.

11:40 p.m. — GOAL. RYAN DONATO HAS THE FIRST KRAKEN GOAL IN FRANCHISE HISTORY. The puck hits a body in front and bounces to Ryan Donato who buries it with Lehner out of position. Vegas leads 3-1.

11:31 p.m. — GOAL. Another pass across to the high-man, this time defenseman Nicolas Hague, and he rips a wrist shot against the grain. Update: this has been credited to Pacioretty.  Vegas leads 3-0.

11:26 p.m. — Just 11 seconds after the Schwartz penalty expires, Seattle gets called for too many men.

10:52 p.m. —  Brandon Tanev gets a breakaway chance while shorthanded but, after watching the play 14 times, looks like Lehner’s swipe knocks the puck away from him away at the last second.

10:50 p.m. — Congrats Jamie Oleksiak you’re the first player in Kraken history to get a penalty (two for tripping).

10:35 p.m. — GOAL. My goodness, Jonathan Marchessault. Left alone in the slot he out dekes Grubauer and slips the puck in behind the goalie from the goal line. Vegas leads 2-0.

10:30 p.m. — GOAL. At even strength, Vegas enters the zone with a 3-on-2 and Mark Stone finds the high-nan Max Pacioretty. The Connecticut native easily beats a sliding Philipp Grubauer. Vegas leads 1-0.

10:26 p.m. — Well, my goodness that Kraken are crackin’ already. Jordan Eberle with a diving attempt that nicks the crossbar. And then the team gets their first power play.

What channel is Kraken vs. Golden Knights on?