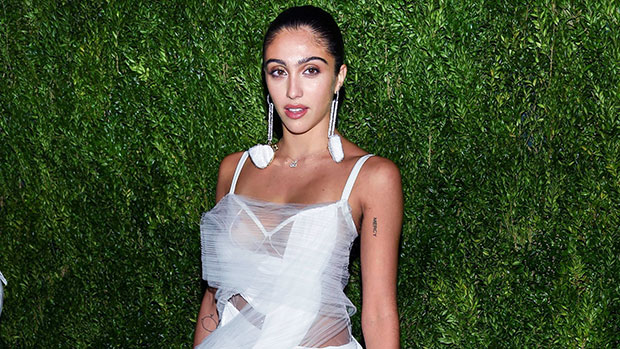 Madonna’s daughter Lourdes rang in the new year with a cheeky pose while a mystery man couldn’t get enough of it! See the risqué snap here!

When your mom is Madonna, there’s a good chance you know a thing or two about provocative poses! And Lourdes Leon — who often goes by “Lola” — proved that was the case when she was snapped in a racy photo on New Year’s Eve. Taking to her Instagram Story, the Material Girl shared the picture of her daughter rocking a sheer white dress with multiple cutouts that left little to the imagination. Lourdes had her back to the camera, was bent over and stuck out her derrière. What a way to ring in the new year!

What’s more, Lourdes — who managed to look stunning while in the awkward position — had attracted the attention of a mystery man for the racy photo shoot. Sitting next to Lourdes, the young man, who was wearing a pair of rose-tinted glasses, had his hand on Lourdes backside. He also just happened to be sticking his tongue out as if he were licking it. The end of the year holiday certainly makes some people celebrate in unique ways.

Loudes is no stranger to serving up sultry looks, as she was recently featured in a PAPER magazine cover story, wearing nothing but skimpy outfits and barely-there ensembles. In one snap, the up-and-coming choreographer rocked a tiny bra and a mini dress that showed off her gorgeous gams. Another racy pic had Madonna’s eldest posing on a BMW in a string bikini and fur boots.

She also spoke about her career plans with the outlet, saying, “I want to choreograph for artists, people that make music, visual artists. I want to choreograph mainly, but there is a big part of me that still does want to perform. Now I’m dipping my toes in the pond of choreography for music videos and stuff like that. I think something bigger will end up manifesting itself, but I have to take other steps in order to find that sweet spot of what is actually going to end up being my [legacy].”