Tennis is grappling with a major anti-vax problem as it enters the Olympic tournament in Tokyo, a city rife with COVID-19.

With men’s world No.1 Novak Djokovic leading a push for choice on vaccination – in his case, the choice not to get the vaccine – tennis has been far from a leader on tackling the coronavirus pandemic.

Leading tennis writer Jon Wertheim has now offered an estimate of the vaccination rate on the elite world tours: as low as 30 per cent, despite the global travel and human interaction involved. The Olympic tournament features 128 singles players across the men’s and women’s draws, plus the doubles and mixed doubles players.

“If athletes want to go vegan or lift more weights or scope their knees—or not—great. Their bodies, their choice. The issue here: There is a collective responsibility. If you don’t want to wear a seatbelt; statistically inadvisable, but your choice. Want to drive on the opposite side of the road? Now we have a problem,” Wertheim wrote in his Sports lllustrated mailbag.

“The idea that you would fly, and enter a locker room or interact with ballkids without being vaccinated is the height of selfishness. Even if you have convinced yourself that you’re not getting COVID-19 – or getting a vaccination might cause dead-arm and impact your tennis for a few days – it would be nice to consider the other people you can impact.

“The tours have pushed a message of vaccination; but are constricted by players who are independent contractors. Some events … have offered vaccinations on site. I talked to a coach over the weekend who put the number of vaccinated players at 30 per cent. I heard from a summer tournament worker who claims that “few” players are vaccinated and the locker room staff should act accordingly.

“You’re tempted to say, ‘tennis, man’. But this goes to something much deeper and more distressing.” 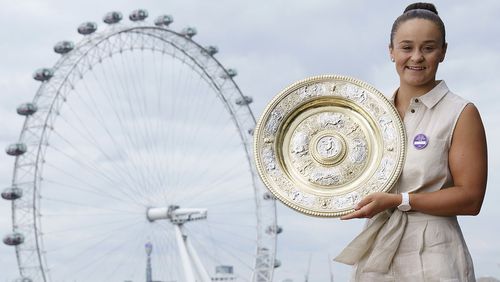 Australia’s women’s world No.1 Ash Barty was vaccinated long ago. The new Wimbledon champion is leading the Aussie team at the Tokyo Games.

Djokovic is representing Serbia at the Olympics, in pursuit of a possible Golden Slam. He has won the Australian Open, French Open and Wimbledon this year, with just the Olympics and US Open remaining. He would be the first man to complete the feat if victorious in Tokyo and New York.

The Olympics tennis tournament begins on Saturday. A number of high-profile players, including Coco Gauff, Johanna Konta and Dan Evans, have already been ruled out in advance due to contracting COVID-19.

Olympic athletes are not required to be vaccinated, unless rules are imposed by their specific national governing bodies.

Rivals.com – Texas/OU could set off realignment dominoes as early as next week Just when he was starting to become one of the best outfielders in 2021, it looks like the Minnesota Twins might be trading Byron Buxton. While he’s spent a lot of time on the IL during his breakout season, a Byron Buxton trade could be in the works if he’s unwilling to sign an extension with the Twins. At least those are what the latest Buxton trade rumors would indicate.

The Twins, after all, are in a rather precarious position. They began the season expecting to compete but fell flat on their face. It’s possible that Minnesota could hit the reset button in 2022 and try again. But as a small-market team, they could trade away some of their best chips and enter a rebuilding phase. The latter possibility has brought about the Buxton trade rumors.

The 27-year-old Buxton could be an interesting addition to the trade market this summer. A fractured hand sent him to the IL in June, but it won’t keep him sidelined for the rest of the season. In just 27 games this season, he’s batting .369 with an OPS of 1.176, performing like one of the best outfielders in 2021. If Buxton comes anywhere close to producing those numbers when he returns, he’ll be an impact player.

But if the Twins decide to trade him, where will he go?

The Yankees are the obvious fit for Buxton. They need at least one outfielder, although trading for two before the deadline isn’t a bad idea either.

More than anything, they need a bonafide center fielder, which is what they’ll get in Buxton. The likes of Brett Gardner, Clint Frazier, and other fill-ins aren’t getting the job done and a Byron Buxton trade would be a huge upgrade for the Bronx Bombers.

Houston isn’t in dire need of a center fielder given the rest of the team’s lineup. But Buxton would represent an immediate upgrade over youngster Myles Straw.

It would be the type of move that would prove that the Astros are serious about contending for another World Series.

Even though Atlanta just traded for Joc Pederson, the Braves could still make a play for Buxton. Keep in mind they’ve lost both Marcell Ozuna and Ronald Acuna, this year, so Pederson alone isn’t going to fill those holes.

Even with Pederson on board, the likes of Guillermo Heredia and Abraham Almonte are playing regularly in the Atlanta outfield. Trading for Buxton would solve some of their problems, giving them a viable bat and an elite defender in the same package.

Much like the Braves, the Phillies have to think the Mets are vulnerable in the NL East, so a big trade for a player like Buxton could make a big difference. Outside of Bryce Harper, there’s not much to like about the Philadelphia outfield.

Andrew McCutchen is showing his age and who knows how long Travis Jankowski can keep being a viable place-holder in center field. That makes Philadelphia the ideal landing spot for Buxton.

The Brew Crew is looking better and better but they still need a little more offensively. Jackie Bradley Jr. and Lorenzo Cain aren’t getting the job done in center field. Buxton would be the perfect solution for Milwaukee, especially since Bradley and Cain are there to provide depth if Buxton gets hurt again.

While the Brewers look good to win the NL Central, they’ll need to make a meaningful improvement at the deadline if they want to make noise in October, which is why Buxton should be on their radar.