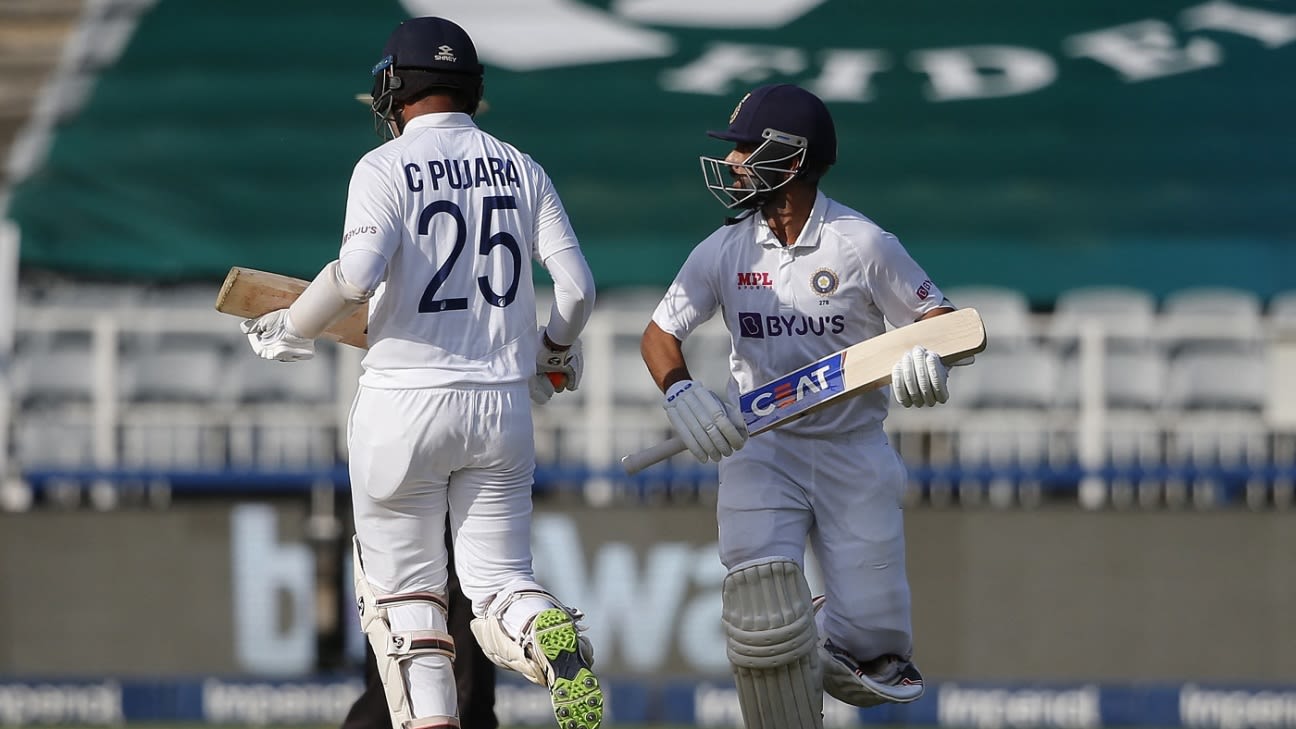 Pujara and Rahane quickly reversed the momentum of the game, putting on 111 at a run rate of 4.75. It was, according to available records, India’s fastest-ever century partnership in South Africa – though the fifth-wicket stand of 222 between Sachin Tendulkar and Mohammad Azharuddin in Cape Town in 1997 (the scorecard lacks fall-of-wickets information) may well have been quicker.

Pujara came flying out of the blocks in the final session of day two, and brought up his half-century on the third morning off just 62 balls. Asked if it was a conscious plan to go after South Africa’s bowlers, Pujara said he had been on the lookout for scoring opportunities without necessarily looking to force the issue.

“Looking at the pitch, this pitch has variable bounce and it’s not easy,” Pujara said at the end of day three. “Whenever you get a loose ball you want to make sure that you put it away. You never know when you will get an unplayable ball. So yes, it was part of my gameplan that if I get a loose ball I will try and convert it, but I didn’t do anything extra.

“I think I’ve been batting well. It was one of those days where everything was going as per my plan. Whenever I was getting a loose ball I was just trying to convert it, but overall really happy with the way things went.

Both batters made half-centuries, potentially relieving any pressure they might have felt over their places in the XI. Pujara, however, said all noise about his and Rahane’s lack of runs was external, and that both had the full support of the team management.

“Well, the team management has been always supportive, so I would say it’s just the outside noise,” he said. “The coaching staff, the captain, everyone is behind all the players, and we have been working hard. There are times when you don’t get too many runs, but the important thing as a cricketer is following the right routine, having good work ethics, and keep working on your game, because there are times when you will not get runs, but if you follow the right processes, you get runs on the board.

“This is what has happened today, and I’m sure that this form will continue and we will get big scores in the next game as well.”

Cheteshwar Pujara: ‘Didn’t do anything extra, been batting well’

The external noise hasn’t just come from armchair critics, though. At the start of their partnership, Sunil Gavaskar suggested on TV commentary that both Rahane and Pujara might be playing for their places.

“We are very confident, also there is lot of backing from the team management, and we’ve been learning from Sunny bhai. Whenever I’ve spoken to him he has always been supportive,” Pujara said. “So yes, there are times when, if you’re going through bad form, there will be questions, no doubt about that, but we are confident players, myself and Ajinkya, we know we are working hard on our game, and there’s a saying – form is temporary, class is permanent, so I feel that it applies here.

“I feel that if we keep working on our game, we have done well for the Indian team in the past, and the management has shown a lot of faith in us, and that will pay off for sure. It has already paid, but I feel that as we keep playing more, as a batsman once you’re back in form, you keep scoring runs and it keeps going up and up.”

The Wanderers Test is intriguingly poised at the end of day three, with South Africa 118 for 2 in their chase of 240. Pujara was confident India would be able to get the eight wickets they need to go 2-0 up in the series, even if South Africa are already nearly halfway to their target with minimal losses.

“If you look at this game, it’s been a challenging pitch, and we have runs on the board, so we are very well balanced in this game,” he said. “Although we haven’t picked up too many wickets today, we are very confident that the pitch will deteriorate tomorrow and we’ll have our chances tomorrow.”

Sessions in this Test match have often shown a two-faced nature, with conditions looking relatively easier to bat in in the first hour and inconsistent bounce becoming more pronounced in the second. Pujara said the use of the heavy roller may have had something to do with this.

“I feel when you take a heavy roller, the pitch settles a bit, it takes a little bit of time for the cracks to open up,” he said. “There are some dents as well, so when there’s a heavy roller, [the pitch] settles down a bit, but after an hour or so we start getting variable bounce, so that is what we are expecting tomorrow – I think first hour it might play nicely, but as the game progresses it will start deteriorating a bit more.”