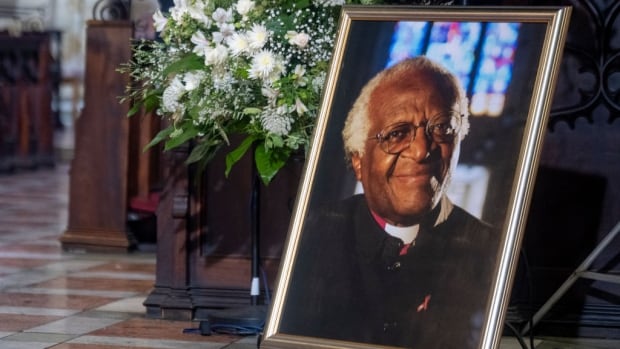 A funeral service was held in Cape Town, South Africa on Saturday for Archbishop Emeritus Desmond Tutu, the Nobel Peace Prize-winning equality activist who was revered in Africa for his role in ending apartheid.

“When we were in the dark, he brought light,” Archbishop of Canterbury Justin Welby, the head of the worldwide Anglican church, said in a video message shown at a requiem mass celebrated in Tutu’s honour Saturday at St. George’s Cathedral.

“For me to praise him is like a mouse giving tribute to an elephant,” Welby said. “South Africa has given us extraordinary examples of towering leaders of the rainbow nation with President Nelson Mandela and Archbishop Tutu … Many Nobel winners’ lights have grown dimmer over time, but Archbishop Tutu’s has grown brighter.”

Tutu’s plain pine coffin, the cheapest available at his request to avoid any ostentatious displays, was the centre of the service, which also featured African choirs, prayers and incense. The service was limited to just 100 mourners due to COVID-19 pandemic restrictions.

Tutu’s widow Nomalizo Leah, known as “Mama Leah,” sat in a wheelchair in the front row of the church, draped in a purple scarf. South African President Cyril Ramaphosa sat alongside her, with a matching necktie.

The cathedral and the Table Mountain that rises above the city have been illuminated every night this week in purple, the colour of Tutu’s clerical robes.

Ramaphosa delivered the main eulogy in which he called Tutu as a “global icon” and someone of “great moral stature” who was “of service to humanity.”

“Our departed father was a crusader in the struggle for freedom, for justice, for equality and for peace, not just in South Africa, the country of his birth, but around the world as well,” the South African president said.

“[He was] a humble and brave human being who spoke for the oppressed, the downtrodden and the suffering of the world,” Ramphosa said.

He was known for his work as an anti-apartheid and human rights activist, as well as his religious status. Tutu was the first black Bishop of Johannesburg from 1985 to 1986 and then Archbishop of Cape Town from 1986 to 1996.

He worked alongside a newly released Nelson Mandela leading negotiations to end apartheid in the country and introduce a multi-racial democracy. As President of South Africa, Mandela chose Tutu to lead the Truth and Reconciliation Commission, which uncovered the abuses of the apartheid system.