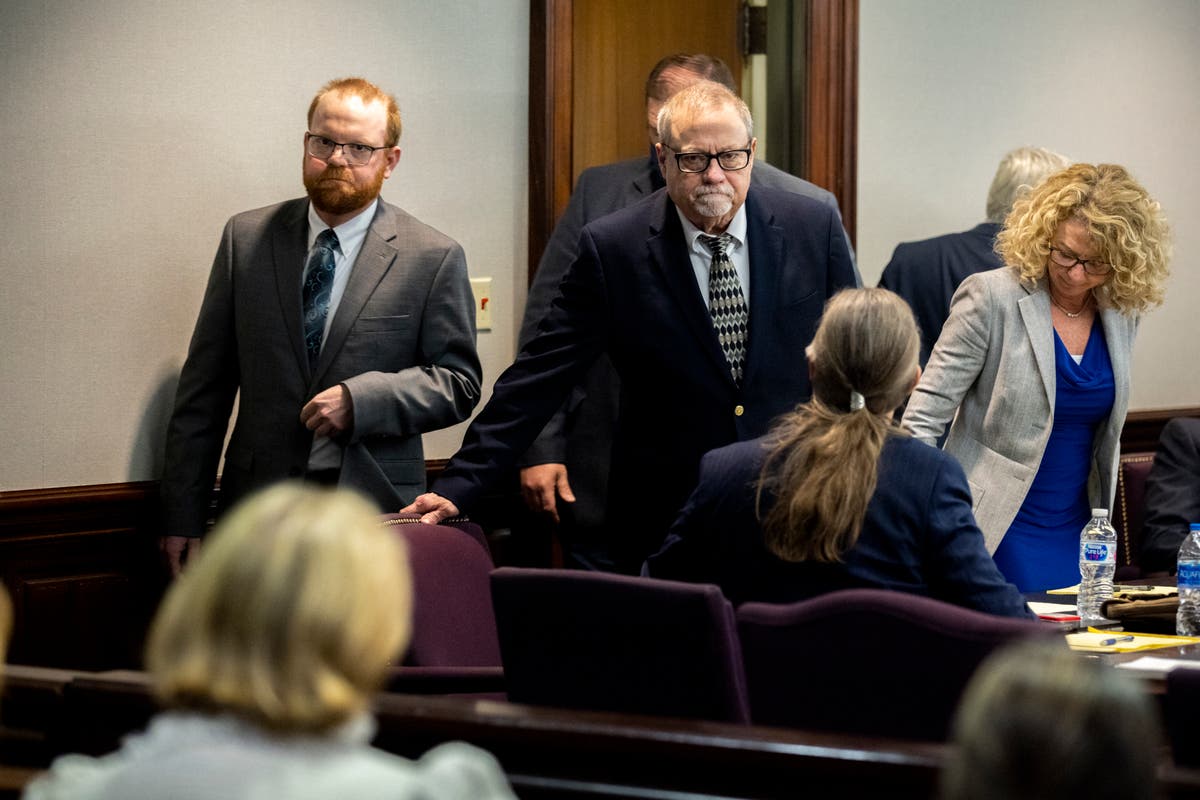 Gregory and Travis McMichael, white father and son convicted of murdering Black jogger Ahmaud Arbery, have been sentenced to life in prison without the possibility of parole plus 20 years.

A judge handed down the sentences in Glynn County, Georgia, on Friday afternoon. The McMichaels’ neighbour and co-defendant William “Roddie” Bryan Jr was sentenced to life with the possibility of parole after 30 years served.

The sentence came nearly two years after the three men chased Arbery, who was unarmed, through a neighbourhood in their trucks before shooting him in February 2020. The attack was captured in footage filmed by Bryan Jr.

Sentencing scheduled for 10am EST

Travis McMichael, Gregory McMichael and William “Roddie” Bryan Jr will appear at a sentencing hearing at the Glynn County Courthouse at 10am EST on Friday.

The three men convicted of killing Ahmaud Arbery in February 2020 are facing the possibility of life in prison.

What charges were Arbery’s killers convicted of?

Travis McMichael, Gregory McMichael and William “Roddie” Bryan Jr were convicted of a string of charges at their trial in November.

Travis McMichael, 35, who pulled the trigger and shot Mr Arbery twice at point blank range, was convicted of all nine charges.

Gregory McMichael, 65, was convicted of eight charges, excluding the count of malice murder.

What is malice murder?

Of all three men found guilty in Ahmaud Arbery’s murder, Travis McMichael was the only one convicted of the top charge of “malice murder”.

In Georgia, malice murder is the most serious charge the state can levy against an individual.

Under state law, malice murder is defined as the “deliberate intention unlawfully to take the life of another human being” in which “no considerable provocation appears” where the killer shows “an abandoned and malignant heart”.

It is essentially equivalent to a first-degree murder charge in other states; it implies intention and will to take another person’s life.

How race played a key role in Arbery’s killing

Attorneys for his killers claimed they were performing a “citizen’s arrest”.

At their trial in November, a jury of 11 White people and one Black person sided with the family.

“There is no question that race is a central part of this case and has been from the very beginning,” Brandon Buskey, director of the ACLU’s Criminal Law Reform Project, told The Independent.

“If Ahmaud Arbery had been a white person in the same circumstances he would still be alive today and that’s a sad fact of our nation’s history.”

Our reporter, Rachel Sharp, explains the key role race played in the trial:

Arbery’s aunt speaks out ahead of sentence

Arbery’s aunt, Thea Brooks, spoke out ahead of Friday’s sentencing to say his family is hopeful parole will not be granted.

“We have been nothing but prayerful,” Ms Brooks told News4JAX. “We’ve done everything in peace, and we’ve done everything accordingly and God answers us. I won’t waiver my faith now because he’s been so faithful. So I’m sure he’ll come through (today) like he has this entire time.”

She also expressed gratitude for the jurors who handed down guilty verdicts.

“I just want to tell them ‘Thank you,’” she said. “They were phenomenal. They took their time. They looked at the evidence. They asked questions. They overlooked things but then went back to see. They put the pieces of the puzzle together. And they actually did a phenomenal job.

“So, if I could in any way repay them, I would. I just appreciate their hard work and dedication, showing up every day and being faithful and coming out with the right verdict for our family.”

Arbery’s mother Wanda Cooper-Jones is expected to give a victim impact statement on Friday morning at the sentencing of her son’s three murderers, her attorney Lee Merritt said.

Ms Cooper-Jones has waited almost two years for her son’s killers to be brought to justice after they evaded prosecution for months in the aftermath of the February 2020 murder – only being arrested when footage of the attack was leaked on social media.

Following the guilty verdicts in November, Ms Cooper-Jones told a crowd of supporters outside the courthouse that she had believed she would never get justice for her son.

“I never thought this day would come, but God is good,” she said.

Arbery’s family rejected a plea deal that would have seen his killers spend 30 years in prison for federal hate crime charges, it has been revealed.

The Department of Justice approached Arbery’s mother, Wanda Cooper-Jones, earlier this week about the deal, under which Travis McMichael, Gregory McMichael and William “Roddie” Bryan Jr would be sentenced to three decades in prison if they admitted they were motivated by hate when they shot dead the Black jogger.

Ms Cooper-Jones told CBS News she rejected the deal because she wants the men to face those charges in court.

Arbery’s parents, Wanda Cooper-Jones and Marcus Arbery Sr, spoke to reporters outside the courthouse before the sentencing hearing kicked off.

They thanked their attorneys and supporters, with Ms Cooper-Jones saying: “The day that my family and I have prayed for has finally come, so thank you,”

The sentencing hearing for Arbery’s killers is now underway at the Glynn County Courthouse in Georgia.

Arbery’s mother, Wanda Cooper-Jones, is expected to read a victim impact statement before the judge hands down a sentence for Travis McMichael, Gregory McMichael and William “Roddie” Bryan Jr.

All three men face a minimum sentence of life in prison. The judge will determine whether they are eligible for parole after serving a minimum of 30 years.

Watch live as Ahmaud Arbery killers sentenced for his murder

At the start of Friday’s hearing, William “Roddie” Bryan Jr’s lawyer Kevin Gough filed two motions arguing that it would be unconstitutional for him to be sentenced to life in prison without parole.

He made the assertion on the grounds that Bryan Jr did not “kill or intend to kill” Arbery.

On the day Arbery was shot, Bryan Jr joined the McMichaels in pursuing the Black man and filmed the deadly encounter.

The judge denied both motions – after Gregory McMichaels’ lawyer sought to join the second as well.

Mr Gough then filed a third motion to vacate counts three, four and five because he said they constitute double jeopardy.

Again, the judge denied the motion.

This isn’t the first time Mr Gough has caused a stir in the courtroom. The Independent’s Rachel Sharp has more:

Post Views: 14
We use cookies on our website to give you the most relevant experience by remembering your preferences and repeat visits. By clicking “Accept”, you consent to the use of ALL the cookies.
Do not sell my personal information.
Cookie SettingsAccept
Manage consent